"Hey Momma, I'm finally on my way home.  I'm just headed out of Baton Rouge, so I'll be there in about three hours or so."
"Do you mind stopping through Natchitoches to pick up some sparkling grape juice?"
"Sure thing."
"Everybody else is here, we're just waiting on you now."
"Thanks.  Tell them I'll be there soon.  Oh, and you have told them already, haven't you?"
"Yeah, I let them know."
"Alright, thanks.  I love you, Momma."


This was a conversation I had on Thanksgiving Eve 2009.  For the first time in who knows how long, my parents would have all three sons under one roof for Thanksgiving.  My oldest brother Tim brought along his wife and son, my middle brother Luther his fiancee (now his wife), and I brought...me.  This was before I had Sophie, even; heck, Tim and his family brought their psychotic Jack Russell Terrier along.  Me?  I was alone.  And, thankfully, my family had the grace to just let it slide.  But I wasn't alone in the same way I had been alone at family functions throughout the rest of my life, not this time.

Rewind three months and some change.  A girl I had met at church during the winter had accepted my advances towards friendship.  In August, I got up the nerve to tell her I had feelings for her, and I wanted to pursue marriage.  That's right, I started the relationship intending to marry her, as opposed to getting over my head in a relationship and then asking if this is the person I wanted to spend my life with.  Things moved quickly, as we went ahead and set a date: 12-13-2009.  I got some flak from my parents, who thought I was moving too quickly both for the relationship and for me financially, as I was still in school.  After several tense conversations, I finally agreed to push the date back to the following summer.  Still, I owned this relationship.  It was my first real relationship ever, since anything I considered a relationship before that was long-distance [granted, there were several things that qualified as relationships without being official, but I had had nothing official since high school].  I showed our picture to everybody I met.  I told all kinds of people I was planning to get married.  I had fun planning and getting addresses and information.

Two months after we started the relationship, I bought a ring and proposed.  I would have done it sooner, but that was the first time I had the disposable income (i.e. student loans came through).  I was communicating with all kinds of family members about when and how and where we'd have the wedding, and how to get everyone there.  Momma came down in October to meet her, and the following weekend I took her up to Coushatta to meet Daddy, some of the extended family, my parents' church, and just show her around in general.  I knew Thanksgiving was coming up, and I was psyched up to introduce her to the rest of the family who would be in town.  A month later, and a week before Thanksgiving, it would be over.

On the way home, as promised, I stopped by Brookshire's in Natchitoches to pick up what I had promised.  I used the express checkout lane.  This is what I saw: 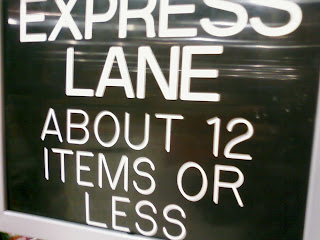 Way to be specific.  In addition to the heartbreak of ending my first adult relationship, I had been quite a bit on the sick side ever since that happened.  Due to the lack of bedding, I had my choices: boy scout cot or pallet on the floor.  No matter where I slept, I was uncomfortable and coughing up a storm.  I finally gave up in the middle of the night, drove to the local roach motel, and paid $60 to sleep for five or six hours, or not sleep, as long as I was in a bed and not keeping people up.

After I returned home the next morning, I discovered something amazing.  Throughout the entire rest of the weekend, nobody said anything about my botched relationship, neither in jest nor in earnest.  We kept a light atmosphere about everything, which my family tends to do.  I've noticed that we're all loud, and so we have no problem having a conversation with another person and still talking loud enough for everybody else to hear.  Conversation is fluid in our family, so anyone is welcome to jump in or out any time they please.  But what stuck out above all is how my family showed me love that weekend: not by having an intervention and making it all about me, but treating the new, single me as a separate entity from who I was just days before.  My failures weren't at the center of the conversation, and it was as though the old man were actually dead.

Strange how that works.  And why shouldn't it?  We've never had a big fight during the holidays in my family, because it's almost like there's a rule book somewhere saying, "Don't talk about anything that'll start a fight, and if someone says something that might start a fight, find some way to keep the peace."  Shouldn't this be the way we operate in the Church?  Shouldn't we love one another in such a way that we come together to be with one another, full of joy and peace, and seeking the best out of each other instead of each person's faults?

Epilogue:  A couple more weeks later, I was back at my apartment.  My alarm went off on a Sunday morning.  As I'm lying there before getting out of bed to get ready for church, I look at the date on my phone: 12-13-2009.  I remember thinking, Wasn't something supposed to happen today?  Why does this date sound so familiar?  Eventually, it hit me: Oh yeah, I was supposed to get married today.