Today, my dad asked me to be his friend on FaceBook.  Via text message.  Now, if you know John Brewer, you know this is crazy talk.  This is his white elephant.  This is his Bigfoot.  First of all, that he would even consider being on FaceBook, second that he would send a text.  For the record, this is only the second text I have ever gotten from him.  And he has an iPhone.

Daddy is a moderate technophile, but usually only when it comes to things he needs.  He had a car phone as far back as 1992 when he started commuting an hour from Shreveport to Coushatta every day.  Not your Zack Morris cell phone, a car phone.  I'm pretty sure this was the model he had: 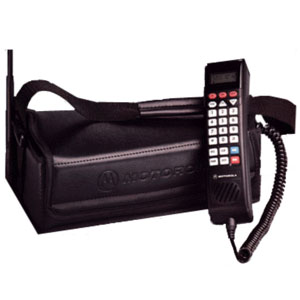 A couple of years later, he upgraded our family's computer from a monochrome Apple II Plus to a Windows 3.1 machine, and generally got a new machine for every Windows upgrade through XP (my mom has a laptop with Vista, but he stopped at XP and just recently got himself a Macbook).  So, like I said, now he has an iPhone.  But for the longest time he wouldn't text; he even had texting turned off on their plans so he wouldn't receive texts from other people and therein get charged for them.

But I didn't explain why he got an iPhone.  He's not like most iPhone users, who just want one because "it has apps," he used it the same way he used the bag phone back in the day: it was necessary for work.  See, Daddy works in radio, and he got the iPhone when they started streaming live radio on the web, with a specific app for the iPhone.  Bottom line, now that he's on FaceBook, I see it as very unlikely that he gave in to the pressure from everyone else and more likely that they plan on doing some sort of viral marketing for his radio stations via FaceBook.

My original reply to his text was, "I don't have a FaceBook account anymore, except for my stealth account."  Regardless, I decided to add him through my stealth account, which meant I had to add my mom, which probably means I'm gonna have to add my brothers, cousins, aunts & uncles...geez, just when I thought I could get away from it.  Yes, I do have a FaceBook account that I only occasionally use to stalk people.  For the rest of the time, it sits there and doesn't get updated.

But the question for me remains: would I go back to full-blown FaceBook for a job?  Obviously, teaching wouldn't be desirable (I wouldn't want my students, parents of my students, or friends of friends of parents of my students to know what I was doing, especially when I got into vent mode), but if I were to open a business, not having a FaceBook page would be about like not having a website: doable, but not optimal.  So my choices would be: use FaceBook myself or outsource it to one of my other employees.  Either way, I'm still with FaceBook, just washing my hands of it.  Kinda like how in the middle ages they left the banking up to the Jews, and shablam, God blessed them with money.  It's like how Asian clothing magazines use Asian models for everything except underwear, which is relegated to white chicks.  Why?  because they don't like the idea of other Asians stripping down for the camera, but it's okay if white people do it.  Because people are crazy, that's why.  Ultimately, I'm exploiting the person who uses FaceBook for me (although I did promise one person they could run my FB and do updates for me...she said she would then never took me up on the offer).