"Behold, I will do a new thing; now it shall spring forth; shall ye not know it?
I will even make a way in the wilderness, and rivers in the desert."
-- Isaiah 43:19
Daddy bought a 1964-1/2 Mustang in 1998, the summer between my freshman and sophomore years of high school.  I loved that car and couldn't wait until I got my license so I could drive it (13 years later and still waiting...).  I read the Mustang magazines and books, looked it up on this newfangled thing we had at the house called "The Internet," and eventually learned to tell one from another.  I knew all kinds of Mustang trivia, such as body styles, features, performance, etc. and could tell one year model from the next all the way through to the present.  I had seen Mustangs before on the road, but now I had an eye for every one -- even the craptastic 80's models with their 4-cylinder motors and 85 mph speedometers.  I took notice at every one we passed, both working and otherwise. 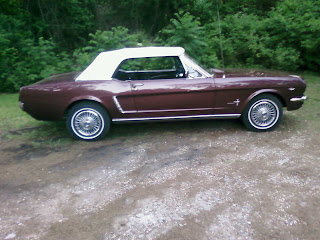 The same thing happened when I got a bike after moving to Baton Rouge.  All of a sudden, every other biker stood out to me, even when I wasn't on my bike.  It was a familiar thing, like, "Hey!  I see you there on that bike!  I have a bike, too!  I don't know you, but i have something in common with you!"  It happened again when I got my Buick.  And then again when I got my Tacoma.
Now, as I've mentioned recently, God is doing a new thing in my life.  He's giving me opportunities to share the Gospel and to minister to people.
It's not that there weren't Mustangs on the road around me before 1998, nor bikes before 2002, Roadmasters before 2003, or Tacomas before 2007.  These things were always around, but I never noticed them because I wasn't looking for them.  I can perceive where God gives me opportunity to minister because I'm not only noticing opportunities, I'm willing to be used.  This isn't to brag on myself, but on the work that the Lord is doing in my life.  These are the things He's willing to do for you, as well, provided you only surrender.

God is doing a new thing in the earth.  I know there weren't prophets walking the streets ministering to people in droves when I was growing up in the Lord, and I wish there had been.  Why weren't there?  Because God didn't call them?  No, that would mean God failed.  There weren't prophets walking the streets because they weren't submitted to the call of God on their lives.  Now, just in time for this last great harvest, I want to see more come forth, and I'm willing to be used.  I remember what it was like when I needed ministry and there were no willing vessels to do it.  God still got through to me, but I know that every opportunity I take is one more person who doesn't have to go without.  Furthermore, it's my responsibility to help in raising up more prophetic ministers in this age.  Be glorified, Lord!

35And Jesus went about all the cities and villages, teaching in their synagogues, and preaching the gospel of the kingdom, and healing every sickness and every disease among the people.
36But when he saw the multitudes, he was moved with compassion on them, because they fainted, and were scattered abroad, as sheep having no shepherd.
37Then saith he unto his disciples, The harvest truly is plenteous, but the labourers are few;
38Pray ye therefore the Lord of the harvest, that he will send forth labourers into his harvest.
-- Matthew 9:35-36.
Posted by Zechariah 4:6 at 11:28 PM