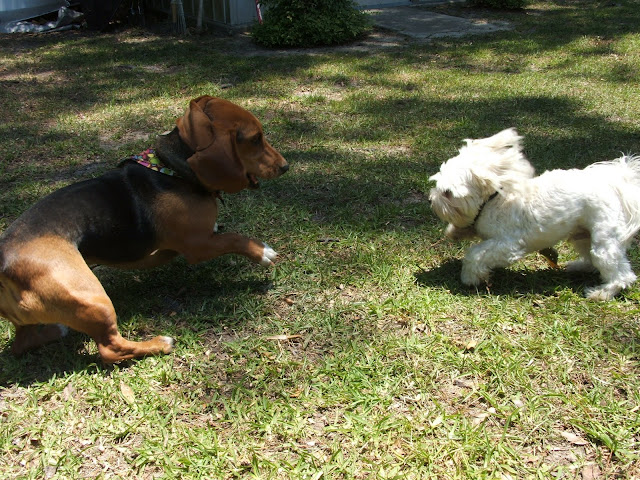 Friends, you already know about my dog, Sophie the Wonder Basset, pictured on the left.  Today, I'd like to introduce you to Bentley, a Maltese who lives next door, who's about the same age as Sophie.  One of Bentley's favorite games is to go to the end of Sophie's lead and play with her there. 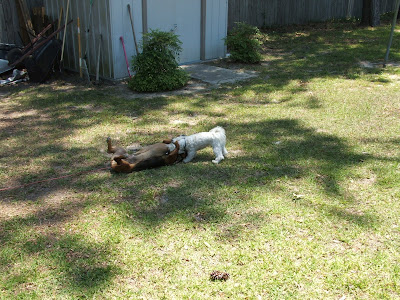 Notice how the lead is completely extended as Sophie is on her back.  Bentley doesn't need a lead, because he's generally more well behaved and a lot easier for his owners to pick him up and carry him if he strays.  Sophie I have to chase.

But for whatever reason, Bentley likes this game.  He's free, she's not.  His owner once suggested that we put him on the lead and let her run free to see how he likes that.  I'd agree, but I don't feel like chasing Sophie once she realizes she can go wherever she feels like. 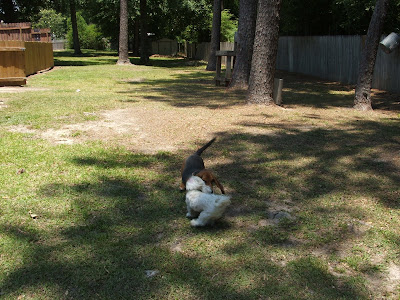 Notice that Bentley is about half her size.  She can hold her own with him, it's just so dang inconvenient that she has this lead around her neck.  Sophie spends most of the day alone, and she relishes in the chance to play with another dog, even if she has to put up with this kind of crap in order to do so.

Then I realized something the other day: Bentley is a dude.  We dudes tend to find certain girls who are into us and use that for our benefit.  Usually, it's something like flirting with a girl at the mall so she'll give me a discount...and then never doing anything until the next time I want a discount.  I've done this myself, but I've also had it done to me, as women tend to employ the same kind of thing.

Really, it's just manipulation, when you get down to it.  And it's a jerk move.  You pretend you like her and keep stringing her along with little bits of attention for as long as it's convenient for you.