What to do in Baton Rouge and New Orleans

When i took a trip to Pittsburgh in March, I thought through my list of friends who live in Pittsburgh.  Then I realized I had none.  Then I re-realized that I did, if you count blog friends.  I emailed Clay Morgan, saying, "Hey, I'm that guy from the internet."  He gave me some sightseeing suggestions, and then promptly posted it on his blog two months later.  He also invited the rest of us to tour-guide others through our own hometowns, so I decided to do both of my adopted hometowns, a.k.a. the cities I've lived in/around for the past ten years since moving out of Coushatta.

What do do in Baton Rouge.

1. First and foremost, you need to visit the flagship university of the state of Louisiana, LSU.  This is about the most beautiful college campus I've ever been on.  Word of warning: in the fall, check the football schedule before you go.  Visiting on game day is either a great idea or a horrible idea, partially dependent upon who your favorite team is.  Go see Mike the Tiger VI.  He's a pretty neat dude, and has a habitat worth more than every place I've ever lived combined. 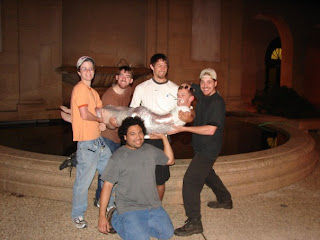 My friends dunking me, saran-wrapped, into the LSU fountain.  Happy Birthday to me!
2. Go up to the Louisiana State Capitol, as you can get to the observation deck and see the whole city as well as the other side of the Mississippi.

3. While you're by the Capitol, go up to the levee.  There's some really pretty areas right by the Mississippi.  Former resident tip: if you park in the lot on River Road near the intersection of State Capitol drive, you can park for free.

What to do in New Orleans:

I've been a little more adventurous in my trips to New Orleans.  Plus, I've never lived there, at least not officially.

1. Aububon Zoo is a great place to visit, as is the adjacent Audubon Park.  You can park in the adjacent neighborhoods for free. 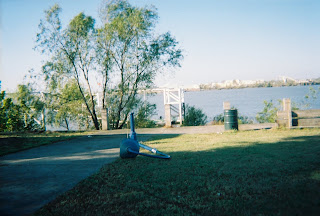 We stood there and watched a garbage truck back into this thing,
empty the adjacent trash can, then drive away.

2. The French Quarter is what everybody knows about the City.  Go ahead, go to the French Market and Cafe du Monde, everybody will ask you why you didn't if you don't.  Also, when you finish your plate of beignets, be sure to get the extra powdered sugar all over the person sitting closest to you.

3. Royal Street in the Quarter has some great art galleries.  Most of the rest of the Quarter is residential, bars, restaurants and tourist shops.  It's nice to have some place you can go into and soak up the A/C without having to pay for it.

4. The World War II Museum is a great place to stop.  I wish I had about three straight weeks to go through and look at everything, but sadly I don't.

Hope you enjoy your time down here.  Make sure I'm free, unless you're Clay Morgan, in which case you're probably in town to put a hit on me, so make sure I know early enough to get away.
Posted by Zechariah 4:6 at 10:11 PM