Where running takes me

Ever gone somewhere you didn't expect to know anybody, but you figured you'd probably meet someone you knew anyhow?  That's what happened when i showed up at the 24th Annual Spillway Classic Trail Run this morning.  I had asked some friends to join me, but nobody committed.  I did end up meeting some other Air National Guard folks from other units, and I'm sure I was easily spotted because I wore my PT uniform out there. 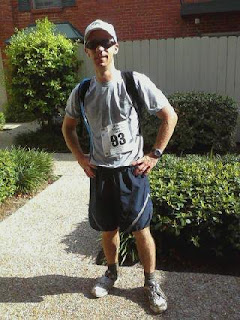 I had no clue how big this race was going to be.  I searched for it on FaceBook and found the date wrong, no current information, and only about 50 people who committed to going.  How well would I do?  Only time would tell.  The race began at 8:00 and I arrived around 6:45.  That got me a good parking spot and no line when I went to pick up my race number and T-shirt.  Once other people started showing up, however, I realized several reasons why I was unprepared:
The run entailed 1.5 miles of running along the levee and 1.5 miles of running through the trails.  As soon as we got off the levee, there was a giant puddle that was between knee and waist deep for me.  I kept a good pace through there, and on through the squishy mud after that (didn't lose a shoe!), but I hit a point where I had to stop and walk for a couple minutes.  All things considered, though, I came in at 29:10 for three miles.  I'll know officially some time soon.

I didn't really consider the fact that it was a trail run, as opposed to a road run, meaning I was completely out of my element.  Okay, not completely, but I was happy with under 30 minutes.  It's also giving me competition experience.  Will i be legitimately competitive one day?  I sure hope so.

Most of all, I took into account the fact that I only got three hours of sleep and got there early so I could be sure and not be late.  I didn't want to go whenever I woke up this morning, but I went anyway, knowing I had invested something in the race (namely, $25) and that I had to push past my flesh's desire to stay asleep.  Yet I'm highly prone to sleeping in most Sundays and considering from the bed whether I really need to shower that morning or if i can get away with not in order to get another 20 minutes of sleep.  I get to church just in time and probably don't get to spend any time in the Word before going.  If I'll do this for a run, why won't I do it for Jesus?  I shouldn't word my Jesus Juke that way, more like "If I'll do it for a run, what will it take to do the same thing for Jesus?"

David says, "O God, thou art my God; early will I seek thee: my soul thirsteth for thee, my flesh longeth for thee in a dry and thirsty land, where no water is; To see thy power and thy glory, so as I have seen thee in the sanctuary"-- Psalm 63:1-2.

Looking back at myself in the summer of 2002, I went where I went on assignment from the Lord because I knew what He wanted me to do.  I had a visible enemy, and I was willing to stand against him.  I gave up things to be with the Lord, and He showed me favor.  As a result, I walked in an anointing I've only seen sporadically since then.  Yet I'm in a ministry, the City of Refuge, that has seen me through to victory over my flesh and has taught me how to war against the powers of darkness; of all times, I should be in authority now over my flesh.  In order to get back to that, I need to remember my first love (Revelation 2:4).

That's where I'm going.  I'm gonna run forward with my sight on Jesus, and I'm going to take up the sword against the enemy whenever he pops up.

Where is God leading you right now?  Where do you need to get back to your first love?
Posted by Zechariah 4:6 at 8:53 PM